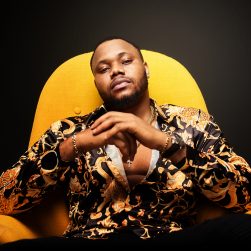 Carrying a family name with worldwide recognition, Francis Ofili Antetonkounmpo started to explore his passion for music at the dawn of 2000, with his first attempts at singing, songwriting and recording. His first single “Shekosi”, poses him for a mainstream breakthrough with its uplifting and irresistible Afrobeats tune. His kind of music is inspired by love and happiness, “the things we all need in life, as human beings”.

Born in Nigeria in 1988, Francis is based in Athens, Greece. This is where his entire family grew up and bonded, urging him to explore both his musical and sports talents, as parts of his DNA. His mother was also a singer back in the day, in his home country. His brothers, the reigning NBA MVP Giannis, Thanasis, Kostas and Alex are set to rule the world of basketball in the years to come, but Francis, leading his own path, will soon be a force to reckon within the music industry. In 2020, he signed with Def Jam Recordings Greece (Minos EMI, a Universal Music Company). His debut single “Shekosi” is an afrobeat song that has it’s own impressive music video.